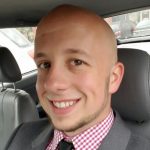 When did you join GCB?

I joined the Glenview community Band in 2013 after moving back to the area with my wife.

What instrument(s) do you play and when did you begin playing?

When I was in 4th grade, the 96-97 school year, I began both the Trumpet and Cello, though I dropped the Cello going into my senior year of high school. So about 22 years.

What made you choose said instrument(s)?

I think I chose these because my neighbors who were a couple years older than me each played one of these, and I wanted to be cool like them?

What is your favorite piece to play? To listen to?

My favorite piece that I have ever played is Lincolnshire Posy by Percy Grainger, which I had the pleasure to play in it’s entirety twice, once as a sophomore at Buffalo Grove High School, and once again as a freshman at Northern Illinois University. My favorite pieces to listen to are Danzon No. 2 by Marquez, Moanin’ by Mingus, American Salute by Gould, and the soundtrack to Hamilton.

What’s your favorite musical memory, in GCB or otherwise?

One of the more memorable muck-ups I’ve had performing was my Junior year of high school, and we played our spring concert at Pick-Staiger at Northwestern. It was a long demanding concert, and we ended it with Alfred Reed’s Russian Christmas Music. If you don’t know, it ends with a Brass chorale somewhat akin to the opening of 1812. Well by this point, my standmate and I’s chops were completely shot. I assumed he would take the first few bars, and I would take the next few and we’d trade off. Well we get to the climax, and I assume he’d take the first shot. Nothing. The melody of the chorale was non-existent. He thought I was going to take it. It wasn’t funny to anyone but us, but we started laughing hysterically, and it took us a good 16 bars to regroup while our director was shooting daggers out of his eyes.

What is your favorite musical group or performer?

I go through different musical “moods” throughout the year, so I can’t nail down a consistent favorite, but you can never go wrong listening to Linkin Park, and other early 2000s hard rock.

What is your favorite flavor of ice cream?

What is your guilty pleasure?

My wife and I are currently in the middle of binging the TV show Blacklist.

What other hobbies do you have?

In addition to trying to be the best father and husband I can be, I also enjoy crocheting.